I liked 50 Shades. How do I explore this for real?

How do people get into this stuff?
Subsections 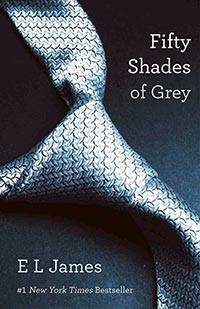 Many people who've read the book have become curious about introducing a bit of kink into their romantic lives.

So I've read the book 50 Shades of Grey, and it's kinda sexy. I'd love to start trying to bring this stuff into the bedroom! What do I do first?

The first thing to do is realize that it won't be like the book.

In fact, a lot of kinsters don't really like 50 Shades of Grey. Many folks feel that the way the characters interact in the book is coercive, if not downright abusive. That's fine for a fantasy story, but it doesn't work so well in reality.

But doesn't that make it less sexy if you take the surprise and spontaneity out of things?

Not at all. Talking about what you are and are not into isn't the same thing as sitting down and scripting what will happen! Instead, think of it as a process of setting out limits--areas in which you want to explore.

That seems like a funny way to go about it. If I want someone else to take control, don't I ruin that by saying what will and will not happen?

Nope. Everyone has limits; there's nobody in all the world who is truly up for anything. Having limits doesn't make you a bad submissive and it doesn't mean you're being controlling. It just means there are some things that aren't interesting to you, and it's okay to say so.

Isn't that what the "contract" Christian gave Ana in 50 Shades was all about?

It's important to talk about what you want and don't want, and what your omits are, before you get going with the sex stuff.

But I haven't tried this stuff in real life before! I don't know what's interesting, or where my limits are!

That's okay. That's part of what exploring is all about.

Whenever you start doing anything new, you'll never be able to predict with certainty what you will and won't like; it's one of the funny little things about being human.

As you explore, it's okay if your limits change. In fact, they probably will! You can start slowly, trying things out to see how they work for you and your partner, and then gradually expand the range of things you try until you find the sorts of activities that really get your motor going.

It might be that you try some things and find out they sound hot in fantasy but really don't work for you in real life. That's okay, too! Whenever you explore new things, whether it's new recipes in the kitchen or new scenarios in the bedroom, you will find some things that work for you and some things that don't. It's perfectly okay to say "You know, I thought that would be really hot but it wasn't everything I had hoped it would be. Let's try something else!"

I know what parts of 50 Shades of Grey turn me on; how do I get that to happen in real life?

First, think about whether or not it's safe to do. There are a lot of things in 50 Shades that seem hot but really aren't very safe to do in real life.

What feels safe and what is actually is safe aren't always same thing! When people start exploring bondage for the first time, for example, they'll often tie each other up with nylon stockings or silk sashes rather than with rope, because rope feels more intimidating.

But kinksters prefer rope because it's safer. Nylon can pull very tight and become almost impossible to untie, and it can cut off circulation without warning. Improvised ties like silk sashes can also become hard to untie, which creates a problem if something goes wrong.

I've written a bit about basic safety here, which you might find helpful to read before you start playing.

Next, talk to your partner.

It can be hard to open up about wanting to try spicing things up in the bedroom.

A few things that really help getting the conversation started are:

• Talk to your partner about sharing sexual fantasies. Everyone has them, even though we are often too shy to admit it. Make it safe for your partner to talk to you about his or her fantasies (and a big part of this is just not freaking out even if the fantasies sound strange or surprising to you or really aren't your thing). Remember that just because someone has a fantasy, that doesn't NECESSARILY mean they want to do it in real life! You're just getting ideas about where your interests overlap, that's all.

• Talk about why the things that turn you on work for you. What is it about them? Do you like the idea of someone taking charge? Is it bondage that excites you?

• If the idea of bringing these things up feels intimidating, it's okay to say so! You can start the conversation with "There are some ideas I'd like to talk to you about. It's kind of intimidating for me to talk about them, but I trust you to listen to me so I'm going to try."

• Ask open-ended questions. "I like the idea of trying ___; it sounds sexy to me. What do you think? What sorts of things turn you on?"

• If you find it awkward or difficult to talk about things in person, try doing it some other way. A great way to get into the conversation is by sexting with your partner. That can make it easier to share fantasies and talk about things you'd like to explore.

So once we've talked about things, how do we get started?

When you've had a chance to talk about the things you'd like to try, it's time to do it! Pick a time when you can focus on each other without distractions. It's normal to feel awkward or nervous when you try new things; that's okay.

Don't be in a rush to do everything all at once. Don't be afraid to try things you aren't sure about. If something doesn't go the way you expected it to, that's okay; it's all part of learning and exploring.

Choose a "safeword"--a special word that means "stop." If you feel like you can't handle or don't like what's happening, use it!

Focus on something that you'd like to explore...being tied up, say, or doing what your partner tells you to do. There's no need to cram everything in at once. It's far better to end feeling you could have done a little bit more than feeling you went too far.

How can I learn about what kinds of things to try?

Fortunately, there's no need for you to go it alone. A lot of folks have spent a lot of time and effort learning what works and what doesn't, what's safe and what isn't.

This can be a great way to be introduced to other folks who explore these kinds of things.